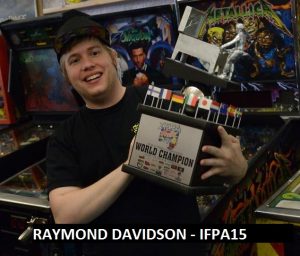 64 of the World’s greatest players traveled from 18 countries to compete in the 15th Annual International Flipper Pinball Association’s World Pinball Championship out in Keswick, Ontario, Canada. After nearly 3 days of the most intense competitive pinball experience the world has to offer, there could only be one World Pinball Champion.

This is Raymond’s second Major Championship, making him the 9th player in competitive pinball history to do so.